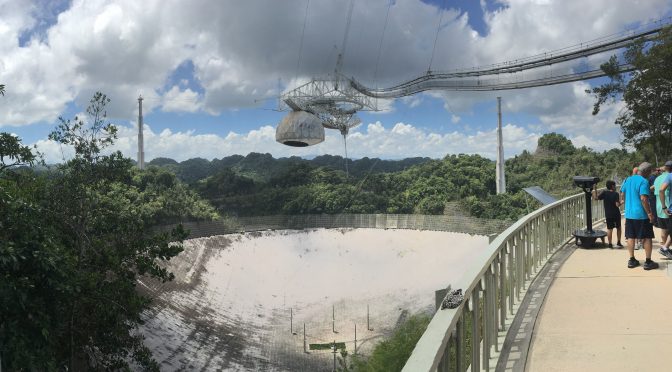 The Radio Telescope in Arecibo, Puerto Rico has been on my travel destination wish list for almost 20 years, ever since the Visitor’s Center was built in 1997.  The Arecibo Radio Telescope was completed in 1963 after only 3 years of construction.  It is a Scientific treasure and an impressive piece of engineering.

Update November 2020: An auxiliary cable crashed into the dish causing a 100 foot gash on August 10, 2020, then only a few months later on November 6, a main cable snapped further damaging the dish and the giant Gregorian Dome. The National Science Foundation (NSF) announced that the telescope will be decommissioned after 57 years in service.

Tickets are purchased outside the Visitor Center, with discounts for Seniors and Children.  Once inside, there is a two-story exhibit to explore some of the telescope discoveries, history of the telescope, and hands-on exhibits.

My favorites exhibits inside are the wall of meteorite fragments from all over the world, Moon rock from the Apollo mission, and the history of the telescope photos.

After exploring the exhibits, listen for announcements for the next mini-movie in the Auditorium (presentations alternate between English and Spanish, so just wait for the next presentation in your preferred language).  After the 20 minute movie in the auditorium, visitors are escorted outside on the terrace to a spectacular view of the telescope.  The tour guide gives a brief presentation and answers questions.

The viewing terrace is outside.  There is a cover for shade over some of the seating.  The best view is not covered so wear sunblock, hat, and sunglasses if you plan to be outside for awhile.  The researchers were repositioning the telescope during our visit and I was so excited to capture video of the movement!

Watching the telescope repositioning movements is mesmerizing!  We stayed outside for photos, video, more questions and just being impressed by the stunning views.

Depending on your interest in the scientific discoveries, interactive exhibits, Q&A session, viewing the telescope itself, and time in (tiny) gift shop plan for 1-3 hours at the observatory.

This was almost an epic FAIL.

I purchased tickets for a special evening event (discovered on FB Page).  Underestimating how horrible the roads were, we arrived 45 minutes into the four hour event, where we discovered a line of cars that stretched almost 2 kilometers from the observatory.  Fifteen minutes passed, as well as an emergency truck, so we assumed a fatal car crash based on the horrific road conditions, and we left.  There was no signal for our phone, so we could not call or check if there was an accident ahead.  Instead we drove down the dangerous roads in the dark, taking twice as long as driving during the day), and were grateful to get back on the toll road.

We went back the next morning and asked about the prior evening’s event.  An employee finally confessed that they over sold the event, selling 800 tickets, and that people had to arrive 3 hours early to get a parking spot at the start of the event.  Everyone else had to wait for those people to leave in order to park and attend the event.  The emergency truck was there as a precaution only, since it would take responders a long time if there was an actual emergency.  The event was poorly organized and there were no plans for additional parking for a special event, nor transportation for the hundreds of people that purchased tickets.

More of what you need to know (before visiting Arecibo Observatory):

For Science and Engineering enthusiasts, the Arecibo Observatory is a must-see destination while in Puerto Rico!